Disaster declared in North Carolina as deaths from Florence 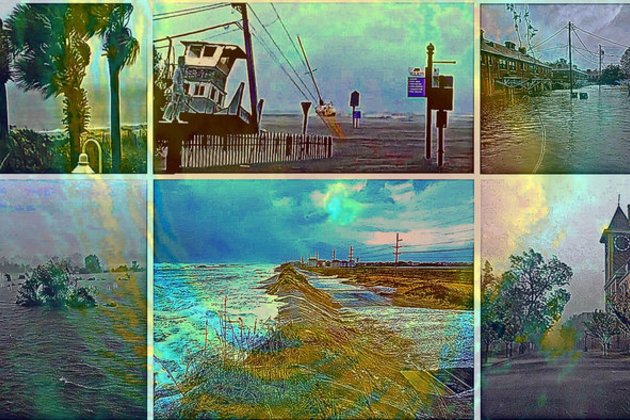 NORTH CAROLINA, U.S. - The death toll from tropical storm Florence, that has been lashing the mid-Atlantic coast of the U.S. with life-threatening rains and flooding, rose to seven on Saturday, even as authorities warned that conditions were set to get worse.

After making landfall in Wilmington, North Carolina, on Friday morning, Florence was downgraded to a category one hurricane.

Later the same day, the National Hurricane Center downgraded it to a tropical storm - even though it kept up its assault on the region, bringing non-stop rain, surging seawater and howling winds.

Forecasters have warned that the slow progress of the 350-mile-wide storm across North and South Carolina could leave much of the region under water.

Officials pointed out that the top sustained winds of the storm had weakened to 50mph (80km/h).

However, Florence was still projected to bring further catastrophic flash flooding in the coming days.

Last week, authorities were warning that Florence could become the most powerful storm to threaten the Carolinas in nearly three decades.

On Saturday, as the U.S. President Donald Trump declared a disaster in North Carolina

Some towns had already received over 2ft (60cm) of rain.

Forecasters also warned that the total could hit 3.5ft (1m).

Authorities also noted that on Saturday morning, the storm was strolling along at 2mph and had lashed eastern South Carolina with heavy rains.

Meanwhile, officials noted that nearly a million residents in the Carolinas had suffered loss of electricity.

The National Weather Service (NWS) reported that the 300-year-old city of New Bern in North Carolina - which houses about 30,000 people and sits on a peninsula between the Neuse and Trent rivers - had been deluged by 10 feet of water.

The record rainfall and the high tide caused dangerous levels of flooding in the city, with New Bern Mayor Dana Outlaw pointing out in a statement to North Carolina's Herald Sun that hundreds of people were rescued in the city on Friday.

Outlaw said, "We're a resilient community, we work well together, we'll get through this. We're not going to be satisfied until the last resident is rescued and in a shelter, and then we can assess damages and go from there."

Further, City spokeswoman Colleen Roberts confirmed that over 360 people were rescued by Friday afternoon and at the time, about 140 others were still waiting for help.

According to the spokeswoman, crews from the city and the Federal Emergency Management Agency (FEMA) were working with citizen volunteers to get people to dry ground.

Roberts pointed out that the city had been placed under a 24-hour curfew until further notice and that early estimates showed that about 4,300 residences and 300 commercial buildings had been damaged.

Most of the city lost power but there have been no reports of injuries of fatalities from the city.

The City of New Bern had constant update and photographs posted on its Twitter page, to inform people about the situation on ground.

The death toll from the tropical storm rose to seven on Saturday as authorities ominously warned that the worst is far from over.

According to official reports, all seven deaths from Florence were reported in North Carolina.

On Friday, a mother and her child were killed in Wilmington when a tree fell on their home and the infant's father suffered severe injuries.

A 78-year-old man was electrocuted while attempting to connect extension cords and a 77-year-old man died when he was blown down by high winds while checking on his hunting dogs.

Meanwhile, in the town of Hampstead, a woman died from cardiac arrest after emergency responders failed to reach her since the route was blocked by downed trees.

The White House said in a statement that Trump might travel to the region next week.

Meanwhile, earlier in the day, North Carolina Governor Roy Cooper warned of "epic" levels of rainfall and said in a statement, "The water is rising fast everywhere, even in places that don't typically flood."

Forecasters have said that on Saturday, the storm will crawl westward, across South Carolina and authorities fear that the death toll will increase.

Further, officials have warned that Florence could unleash floods inland into early next week and between 10 and 15 inches of rain is expected along with storm surges of 2-5ft across the region.