VANCOUVER, BC / ACCESSWIRE / November 23, 2021 / Emgold Mining Corporation (TSXV:EMR) ('Emgold' or the 'Company') is pleased to provide the following exploration update for its advanced stage Golden Arrow Property, NV ('Golden Arrow' or the 'Property'). The Company has identified 34 new gold and silver exploration targets for follow up, six of which are deemed high priority and 10 of which are deemed medium priority. Two of the high priority targets are in the vicinity of the known resource areas called Hidden Hill and Gold Coin. Four of the high priority targets are on new claims staked by the Company.

David Watkinson, President and CEO of Emgold, stated, 'The purpose of the work was two-fold: The first goal was to expand our understanding of the current resource areas on the Property with the plan to eventually expand them through additional drilling; and the second goal was to identify new exploration targets on the Property where we hope to generate new resources through additional drilling in the future. Both these goals were met.' Note that development of additional resources will be subject to exploration success and other factors.

About the Golden Arrow Property

Golden Arrow is an advanced stage gold and silver property located in the western flank of the Kawich Range, located 40 miles east of Tonopah in Nye County, Nevada. The Property consists of 511 patented and unpatented mineral claims totaling about 10,000 acres in size. The total exploration area has a length of approximately six miles and a width of two miles and contains the majority of the historic Golden Arrow mining district (the 'District').

Golden Arrow has a comprehensive exploration database including geochemical sampling, geophysics, and over 201,000 feet of reverse circulation and diamond core drilling. To date, two main resource areas have been drilled on the Property focusing on bulk disseminated gold and silver mineralization - the Gold Coin and Hidden Hill deposits. Numerous other exploration targets have been identified for exploration. 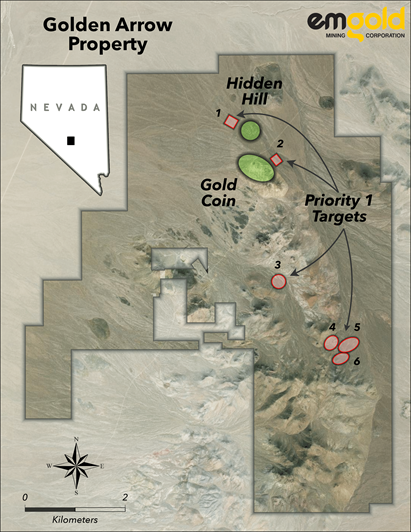 At Golden Arrow, most historic exploration has been concentrated in the Gold Coin and Hidden Hill gold and silver resource areas, with an effort to develop measured and indicated mineral. An area to the south of Emgold's existing claim block, which has been controlled by other parties for many years, became open for staking. Recognizing the potential of this area for the potential of development of additional resources at Golden Arrow, Emgold retained Rangefront Mining Services to stake an additional 137 unpatented mineral claims, expanding the Golden Arrow claims to 17 patented and 494 unpatented mineral claims totaling about 10,000 acres.

A helicopter magnetic-radiometric survey was conducted by Precision GeoSurveys Inc. in December 2020 and results received in early 2021. The area covered included the southeast quarter of the main Golden Arrow claim block and the new claim area to the south. Deliverables included magnetics and radiometric maps, a logistics report, and data files.

A gradient array induced polarization and resistivity survey was completed over the same area by Zonge International Inc. in March 2021. The data received included IP and resistivity maps, a data acquisitions report, and data files.

The 3D modeling makes it possible to visualize and examine the lithologies and structures at Golden Arrow from all angles and, when combined with the previous geologic studies, helps determine relative ages of the rock units and other geologic events. At Golden Arrow, the lithologic units are all volcanic origin, including hypabyssal intrusive rocks from the volcanoes and associated volcanic flows and tuffs.

Several conclusions came out of generation of the 2021 3D Geologic Model. They include:

The 2021 3D Geologic Model was provided to Condor Consulting Inc. to assist in their geophysics review.

In late May of 2021, Emgold retained Condor Consulting Inc. to begin an assessment of historic and new geophysics data available for the Golden Arrow Property. The first recorded geophysical surveys on the Property were recorded in 1989 and the most recent data was collected in 2021. While most of the surveys are deemed to be of reasonable quality, very little actual interpretation or systematic modeling of the data has been carried out.

The data Condor utilized in their review and analysis included:

Using these datasets, Condor conducted a comprehensive geophysical and geologic interpretation of the Property. This included re-interpreting the geophysical data, a petrophysics analysis, Geointerp evaluation, and delineation of new of exploration targets. Condor reviewed and re-interpreted the usable geophysical survey data and obtained magnetic susceptibility readings from rock outcrops on the Property and drill core. Geointerp, an analysis using magnetic data and geologic elements, was applied to interpret structures.

Using the results of each type of analysis, exploration zone targeting was conducted. The priorities of the exploration target zones were determined by the number of favorable geophysical features from Condor's comprehensive analysis of existing surveys, plus geological and geochemical aspects from work done on the Property. High chargeability, high resistivity, and high gravity anomalies were heavily weighted factors. 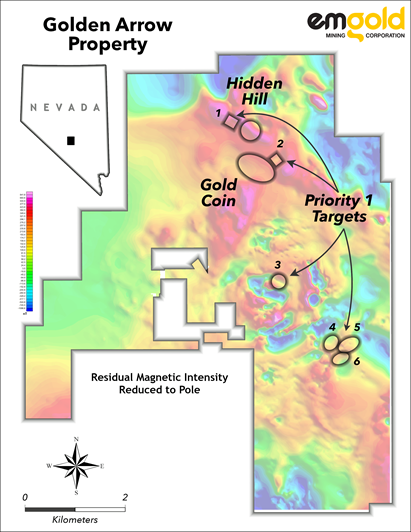 Target 1: This geophysical target is at the same location as a target delineated by 3D modeling where felsic tuff is found underlying the oldest andesites west of the Hidden Hill deposit. Condor describes this area as being along the edge of a narrow MT zone, a high resistivity arc, and a high chargeability unit, with evidence that latite will be found at depth. It is an area of very sparse drilling.

Target 3: In the center of the Golden Arrow claim block, Westgold geologic mapping shows this area being at the contacts of several felsic tuff units and at the intersections of several faults. The geophysical target is in a new exploration area and described as being in a magnetic flat zone surrounded by complex magnetics, corresponding IP and resistivity high, and GeoInterp prospectivity.

Target 4: In the southeast corner of the main Golden Arrow claim block, at the contact of two tuff units, this geophysical target is in a resistivity low directly on the edge of an extensive resistivity high, with some elevated IP and depleted potassium. Also deemed prospective by GeoInterp, this target is near historic mine workings and geochemical anomalies. Note that targets 4, 5 and 6 are very close together.

Target 5: Essentially adjacent to the east of Target 4, this target has elevated IP response and depleted potassium. Historic geochemical results were encouraging in this area, and GeoInterp sited it as being prospective. Most of this target is under pediment alluvium.

Target 6: Adjacent to Targets 4 and 5, this target has elevated IP associated with historic mine workings and a geochemical anomaly. It is on the edge of low magnetic zone and considered prospective by GeoInterp.

One part of the analysis by Condor was a re-interpretation of the 2011 Quantec Orion Survey. Condor analyzed 3D DC Resistivity, 3D MT Inversion, and 3D IP at depth slices of 1,750 m, 1,650 m, 1,550 m, 1,450 m, 1,350 m, and 1,250 m asl. The results showed a large circular feature, over 1.0 km in diameter exists to a depth of several hundred meters (and likely continues much deeper). It appears to have a direct association with Hidden Hill and Gold Coin, which both occur on the edge of the circular feature. The large target extends into areas that have little or no previous drilling. A 3D Resistivity Inversion plot shows this feature in Figure 3 below. Note the Hidden Hill and Gold Coin resources are outlined in red and show up on the edge of this circular feature. 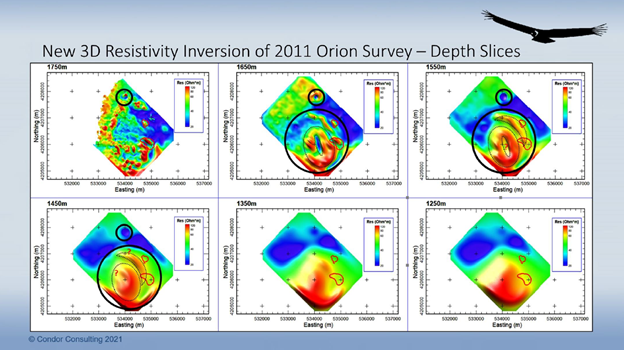 David Watkinson stated, 'The work completed by Condor and Emgold shows that there is potential to expand resources in the vicinity of the known resources areas of Hidden Hill and Gold Coin. Emgold has an existing Plan of Operations and Environmental Assessment completed in this area to allow drilling to proceed, subject to financing. In addition, the 2021 geophysical surveys, along with Condor's evaluations, has identified multiple new exploration targets on the new claim area that Emgold can now follow up on with geological and structural mapping, soil sampling, and ultimately drilling. Based on the size of the targets, Emgold management believes that there is potential to expand the Golden Arrow resources with more drilling, targeting 500,000 to 1.0 million gold equivalent ounces, subject to exploration success.'

Robert Pease, C.P.G., a qualified person under the NI 43-101 instrument, has reviewed and approved the content of this press release.

Emgold is a gold and base metal exploration company focused on Nevada and Quebec. The Company's strategy is to look for quality acquisitions, add value to these assets through exploration, and monetize them through sale, joint ventures, option, royalty, and other transactions to create value for our shareholders (acquisition and divestiture (A&D) business model).

In Nevada, Emgold's Golden Arrow Property, the core asset of the Company, is an advanced stage gold and silver property with a well-defined measured and indicated resource. New York Canyon is a base metal property subject to an Earn-in with Option to Joint Venture Agreement with Kennecott Exploration, a subsidiary of Rio Tinto Plc (NYSE:RIO). The Mindora Property is a gold, silver, and base metal property located 12 miles from New York Canyon. Buckskin Rawhide East is a gold and silver property leased to Rawhide Mining LLC, operators of the adjacent Rawhide Mine.

In Quebec, the Casa South Property, is an early-stage gold property adjacent to Hecla Mining Corporation's (NYSE:HL) operating Casa Berardi Mine. The East-West Property is a gold property adjacent to and on strike with Wesdome Gold Mine Ltd.'s (TSX:WDO) Kiena Complex and O3 Mining Corporation's (TSX:OIII) Malarctic Property (Marban Project). The Trecesson Property is located 50 km north of Val d'Or Mining Camp. Emgold also has a 1% NSR in the Troilus North Property, part of the Troilus Mine Property being explored by Troilus Gold Corporation (TSX:TLG).

On behalf of the Board of Directors
David G. Watkinson, P.Eng.
President & CEO