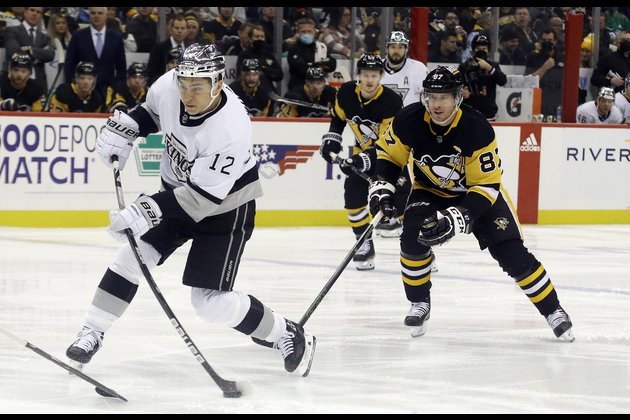 Trevor Moore scored his second goal of the game in the third period Sunday to give the visiting Los Angeles Kings a 4-3 win over Pittsburgh, snapping the Penguins' eight-game point streak.

After the Kings blew a two-goal lead in the third for a 3-3 tie, Moore came off the bench and got behind the Pittsburgh defense for a breakaway. He shot the puck over goaltender Tristan Jarry's glove at 13:21.

Alex Iafallo and Drew Doughty also scored, and Anze Kopitar had two assists for the Kings, who improved to 3-0-2 in their past five games.

Bryan Rust scored twice, Sidney Crosby had a goal and an assist and Kris Letang added two assists for the Penguins. Jarry made 34 saves.

The Kings took a 1-0 lead at 1:17 of the second. From the corner, Kopitar fed Iafallo in the left circle. Iafallo ripped a shot that deflected off Crosby's stick and over Jarry's left shoulder.

Crosby tied it at 8:29 of the second on a power play. Evgeni Malkin, from the left point, passed to Crosby, who flipped a shot from the left hash marks past Petersen.

At 10:35 of the second, Moore restored Los Angeles' lead. Off a stretch pass from Jacob Moverare, Moore chipped in a backhander from beneath the right circle to make it 2-1.

During four-on-four play, Doughty extended the Kings' lead to 3-1 at 13:49 of the second. Off a two-on-one with Kopitar, his close-range shot was stopped by Jarry, but he made good on the rebound.

Rust cut it to 3-2 at 6:17 of the third. From the lower part of the left circle, he sent a spinning shot toward the crease, where Crosby leapt to avoid the puck as it sailed past Petersen.

Pittsburgh cashed in on a power play at 10:02. Rust's second goal came when his pass across the top of the crease deflected in off Doughty's skate for a 3-3 tie.

Jake Guentzel got an assist for his 300th career point.

Unable to staff airports, Germany to bring in foreign workers

BERLIN, Germany: A German Interior Ministry spokesperson has said that in a bid to relieve airports overwhelmed by staff shortages ...

PARIS, France: In a written statement made this week confirming a report from broadcaster RTL, France's energy ministry said the ...

US farms planting unplanned crops due to chemical shortages

WASHINGTON D.C.: Due to persistent shortages of agricultural chemicals that threaten yields, U.S. farmers have cut back on using common ...

Manila[Philippines], June 25 (ANI): The Philippines has terminated talks with China for a joint energy project in the South China ...

Zurich [Switzerland], June 25 (ANI): The Executive Board (EB) of the International Olympic Committee (IOC) has decided that the boxing ...

Dublin [Ireland], June 25 (ANI): The Indian Junior Women's Hockey Team is all set to take on the Netherlands in ...

Washington [US], June 25 (ANI): US President Joe Biden on Saturday signed into law a bipartisan gun safety bill in ...

Washington [US], June 25 (ANI): Researchers describe the morphological and genomic features of a 'macro' microbe' -- a giant filamentous ...

The Ballad of Buster Scruggs