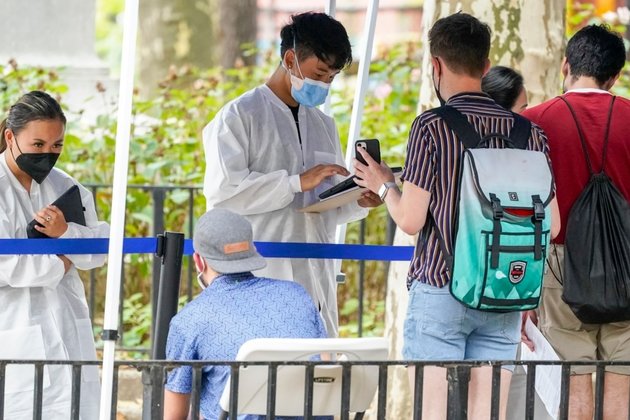 "This order will bolster our existing efforts to educate, vaccinate, test, and treat as many New Yorkers as possible and ensure a whole-of-government response to this outbreak," Adams said in a statement released with the executive order.

The order allows Adams to suspend local laws and temporarily impose new rules to control the spread of the outbreak.

Similarly, Gov. Kathy Hochul declared a state disaster emergency last Friday. She previously announced that over the next four to six weeks, the federal government would distribute 110,000 vaccine doses to the state in addition to the 60,000 already distributed.

Action on Monkeypox Accelerates in US as Outbreak Expands

As of Monday, New York City has reported 1,472 cases, according to monkeypox data on the NYC Health website. Most cases worldwide have affected men who have sex with men.

In an announcement Saturday declaring a public health emergency in the city, Adams and Health Commissioner Ashwin Vasan estimated that about 150,000 New Yorkers may be at risk of monkeypox infection.

Cases are continuing to rise across the country. New York currently has the highest number of recorded monkeypox cases among the 50 states, followed by California with 799 cases as of Friday, the CDC reports. San Francisco Mayor London Breed declared a state of emergency on Thursday.

Though California has distributed more than 25,000 vaccine doses, Gov. Gavin Newsom said in a KTVU-TV interview last week that the state is "not even close to where we need to be."

The rapid spread of monkeypox worldwide has sparked alarm over the past few months. Since May, more than 22,000 cases have been reported in 80 countries, despite the virus naturally occurring only in Central and West Africa.

The World Health Organization declared a global health emergency over monkeypox on July 23.

NEW YORK, New York - U.S. stocks closed mixed on Monday as investors fret about CPI data due to be ...

RICHMOND, Virginia: Dominion Energy Virginia has received state approval to build an enormous offshore wind farm off the coast of ...

SYDNEY, NSW, Australia - Stocks in Asia were mixed on Monday, but gains and losses were modest.There is concern the ...

Australia to close coal mine near Great Barrier Reef

CANBERRA, Australia: Australia's new government has announced plans to ban the development of a coal mine located near the Great ...

US considers rules for refunds to air passengers suffering delays

WASHINGTON D.C.: The U.S. Transportation Department said it could require airlines to offer passengers a refund if their flight schedules ...

Atlanta to spend $45 million on electric buses and charging stations

President Joe Biden's bipartisan infrastructure law will disburse up to $239 million to help Georgia improve the resilience of transportation ...

With sky-high expectations after a monstrous talent haul at the trade deadline, the San Diego Padres might well have received ...

Angels-A's series opener to have a familiar feel

The Los Angeles Angels hope to have Shohei Ohtani available when they begin a rematch series against the host Oakland ...

Paul Eenhoorn, 'This Is Martin Bonner' and 'Land Ho!' actor, dies at 73

Washington [US], August 8 (ANI): The Australian actor Paul Eenhoorn, best known for his critically acclaimed cameo appearances in the ...

The American leader has welcomed a ceasefire between Israel and Gaza militantsUS President Joe Biden has commended the Israeli government ...

Miracle in Milan (Miracolo a Milano)