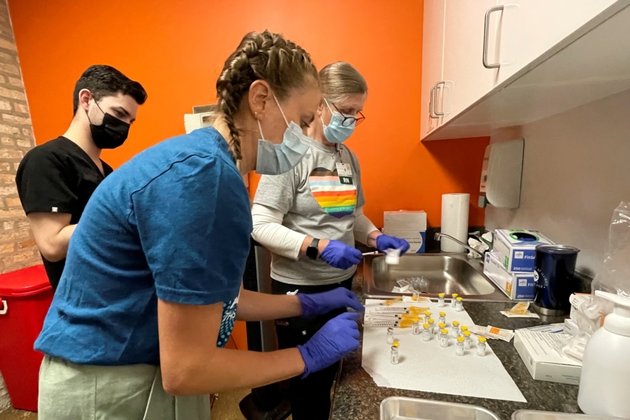 The public health response to the outbreak of monkeypox in the United States has so far failed to prevent significant community spread of the disease, leading to a call for a reassessment of the strategy for containing it.

Since the first reported U.S. case of the outbreak on May 17, the number of infections has soared to more than 5,000, with the majority found among men who have sex with men.

Although reporting of case numbers is scattered across different agencies, the U.S. appears to account for more than 25% of global cases identified during the current outbreak, which the World Health Organization has identified as a "public health emergency of international concern."

'You have to act fast'

Infectious disease experts have been dismayed by what they saw as a lack of urgency on the part of U.S. public health agencies in the early weeks of the outbreak.

"What I expected to see would have been a more vigorous kind of a response based on lessons that we've learned from ... COVID-19, as well as lessons we've learned from the HIV response," Dr. Wafaa El-Sadr, founder and director of ICAP at Columbia University Mailman School of Public Health, told VOA.

"When you have an outbreak, the most important thing is you have to act fast, you have to mobilize, and ... you have to rally all your assets to work together really quickly to be able to do what's needed," El-Sadr said.

Action on Monkeypox Accelerates in US as Outbreak Expands

Facing criticism at the end of June, the White House announced what it called the 'first phase' of a national monkeypox vaccine strategy designed to 'help immediately address the spread of the virus by providing vaccines across the country to individuals at high risk.' The administration said that it would 'rapidly deploy vaccines in the most affected communities and mitigate the spread of the disease.'

The monkeypox virus comes from the same family as the deadly smallpox virus, but infections with the disease tend to be far less severe and are rarely fatal.

The disease typically presents with a fever and body aches, followed by the eruption of skin lesions, which can occur all over the body but which are often found on the face and hands.

Though the disease is rarely fatal, the skin lesions can cause severe pain lingering over several weeks.

According to data collected by the World Health Organization, diagnosed new cases of monkeypox have been concentrated in Europe and North America during the latest outbreak, with more than 14,000 reported in the WHO's European Region and nearly 6,800 in North America.

By contrast, there are far fewer cases in other regions tracked by WHO. The agency's African Region has reported only 328 cases, and numbers are far lower in the Western Pacific Region (65), the Eastern Mediterranean Region (26) and the South-East Asia Region (6.)

It should be noted that case numbers are affected by countries' capacity to test and report active cases of monkeypox, meaning that in some developing countries, the numbers reported to the WHO may represent an undercount.

Monkeypox is the sort of disease that the U.S. public health infrastructure ought to be able to combat effectively.

First, because it spreads primarily through close skin-to-skin contact, it is far less contagious than the virus that causes COVID-19, which can be transmitted through the air.

In addition, effective tests to diagnose the disease are available, as is a vaccine to prevent infection. There is also a highly effective treatment available for infected people.

However, the public health response in the U.S. has so far failed to take full advantage of the opportunity to counter monkeypox.

In a July 15 letter to senior public health officials, including Secretary of Health and Human Services Xavier Beccera and CDC Director Rochelle Walensky, a group of physicians and activists complained, "Multiple unnecessary regulatory barriers to treatments, diagnostics, and vaccines have prevented people in the United States from accessing medical countermeasures necessary to protecting their health, allowing the continued spread of monkeypox virus."

While tests exist that can reliably identify cases of monkeypox, in the early weeks of the outbreak only labs affiliated with the Centers for Disease Control were authorized to administer them, creating significant backlogs in testing. They have since been made available to several large commercial laboratory chains, but the initial delay may have contributed to the early spread of the disease.

WHO: People Exposed To or At Risk of Monkeypox Should Be Vaccinated

Even though there is an effective vaccine against monkeypox, U.S. officials failed to order new doses to add to the country's limited stockpile until June, the month after the disease began spreading. In addition, U.S. regulators did not approve the use of a facility in Denmark, where the vaccine is manufactured, until the middle of July.

While the medication tecovirimat is known to be highly effective against smallpox and has shown success against monkeypox as well, at the beginning of the outbreak, the CDC required doctors to go through an onerous application process for each patient, greatly slowing the distribution of the medication.

In a blistering op-ed published in the New York Times on Saturday, former Food and Drug Administration commissioner Dr. Scott Gottlieb wrote, "Our country's response to monkeypox has been plagued by the same shortcomings we had with Covid-19. Now if monkeypox gains a permanent foothold in the United States and becomes an endemic virus that joins our circulating repertoire of pathogens, it will be one of the worst public health failures in modern times not only because of the pain and peril of the disease but also because it was so avoidable."

He continued, "Our lapses extend beyond political decision making to the agencies tasked with protecting us from these threats. We don't have a federal infrastructure capable of dealing with these emergencies."

CDC Director Rochelle Walensky has challenged criticisms from Gottlieb in the past. Earlier in July, she said in a statement to CNN, "It is true that we have work to do - here and internationally - and are likely to see more monkeypox cases in the near term, but it is possible to significantly decrease the number of cases and contain the current monkeypox outbreak through education and increased testing and access to vaccines - all priorities we've made dramatic progress on.'

The CDC has launched an effort to support case identification and contact tracing nationwide, as well as support for testing and 'case confirmation.' In addition, the agency has expanded outreach to medical professionals to help them identify cases of monkeypox and has expanded its efforts to communicate information about the disease to the public, particularly to the populations most at risk.

CDC researchers are also investigating the nature of the disease, including precisely how it is transmitted and what course the illness typically takes once a person is infected.

At a global level, the CDC reports that it is sharing information with other countries to help coordinate a global response to the virus. This includes close cooperation with the government of Nigeria in an effort to sequence the DNA of the virus, in order to better understand its evolution.

El-Sadr, of Columbia University, told VOA that while she is concerned about the response to the disease this far, she believes there is still an opportunity to bring it under control.

"We have enough tools already," she said. "If we could just mobilize and communicate and utilize those tools, I think we have a shot at stopping this outbreak. But the window of opportunity closes very fast when it comes to outbreaks and that's the reason why there's a profound need for urgency."

Failure, she said, could leave the U.S. facing the prospect of monkeypox becoming endemic in the country, meaning that it would persist at a fixed level in the country even if no additional infected people arrive from other countries.

NEW YORK CITY, New York: After a study released on Wednesday projected a 15 to 20 percent reduction in the ...

KATHMANDU, Nepal - While the Ministry of Finance has begun repaying interest on the loans for the planes, a batch ...

US gas prices below $4 per gallon after demand falls

WASHINGTON D.C.: Providing relief to drivers in the United States, the average retail gasoline price in the US fell below ...

NEW YORK CITY, New York: Walmart could sign a deal with Disney, Paramount, or Comcast, with the aim of breaking ...

Domino's pizza shuts down all stores across Italy

MILAN, Italy: Milano Today has reported that seven years after launching in the country, American pizza giant Domino's has now ...