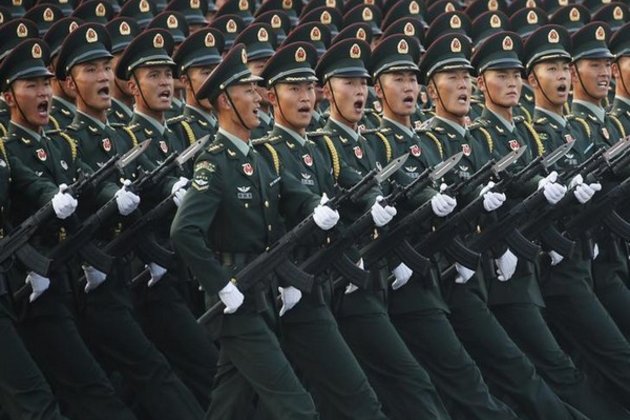 Tokyo [Japan], August 2 (ANI): Satellite photos show that China is building a new nuclear test site in Xinjiang Uyghur Autonomous Region (XUAR) speeding up the nuclear arms race to achieve the ambition of becoming military power on a par with the US contradictory to President Joe Biden has advocated a "nuclear-free world.

Nikkei Asia viewed satellite photographs with a number of experts that appear to confirm China is strengthening its nuclear testing capability.

The evidence of new construction was detected by a satellite 450 kilometers above Lop Nur, a dried-up salt lake in the southeast of Western China's Xinjiang Uyghur Autonomous Region. Many analysts believe that the secret nuclear testing area is secured by the People's Liberation Army.

China has conducted five underground nuclear tests at Lop Nur, the last in 1996. Evidence that a sixth tunnel has been excavated points to a planned resumption.

"China could conduct nuclear-related tests anytime, especially since the electricity line and road system now connects Lop Nur's western military nuclear test facilities to new possible test areas in the east," an expert at AllSource Analysis, a US private geospatial company, told Nikkei. The researcher spoke on the condition of anonymity because of the sensitivity of the subject.

China aims to become a military power on a par with the US by the middle of the 21st century -- a formidable ambition given the underdeveloped state of some of its forces and materiel.

China has 2.04 million military personnel. Although that is already the largest standing force in the world -- and 1.5 times larger than that of the US, reported Nikkei Asia.

But China's military system remains corrupt and nepotistic. The PLA is also untested; its last real combat experience was the Sino-Vietnamese War of 1979.

The Xi administration may be contemplating the unification of China, and that would involve taking Taiwan by force. But Russia's invasion of Ukraine has provided a sobering warning about the risks of military adventures, reported Nikkei Asia.

Although there are no nuclear power plants in the Xinjiang Uyghur Autonomous Region, the Xinjiang Production and Construction Corps (XPCC) said that it will "make 2022 the starting year for strengthening the capacity to monitor radioactivity."Satellites detected new terrain levelling activity at Lop Nur in October 2020. Big trucks came and went in 2021, and the power infrastructure for the sixth tunnel was built in the first half of 2022. In June, the explosive storage facility was completed, reported Nikkei Asia.

Increased radiation was detected in the vicinity alongside these developments. A new underground facility that could be used to launch nuclear missiles was found nearby.

Time is not on Xi's side. He is manoeuvring for a third term that will end in 2027.

"Possibly (he) wants to discourage US intervention in the Taiwan Strait by threatening to use small nuclear weapons," Nobumasa Akiyama, a professor at Hitotsubashi University who studies East Asian security, told Nikkei.

If there is an emergency in the Taiwan Strait, maritime control will of course be the key issue. Small nuclear weapons with limited strike capabilities could enable China to hold US aircraft carriers at bay.

Although President Joe Biden has advocated a "nuclear-free world," the US conducted subcritical nuclear tests without reaching a critical mass in June and September 2021.

By holding more than a quarter of the world's nuclear warheads, the US continues to compete head-on with China and Russia on nuclear weapons. (ANI)

NEW YORK CITY, New York: After a study released on Wednesday projected a 15 to 20 percent reduction in the ...

KATHMANDU, Nepal - While the Ministry of Finance has begun repaying interest on the loans for the planes, a batch ...

US gas prices below $4 per gallon after demand falls

WASHINGTON D.C.: Providing relief to drivers in the United States, the average retail gasoline price in the US fell below ...

NEW YORK CITY, New York: Walmart could sign a deal with Disney, Paramount, or Comcast, with the aim of breaking ...

Domino's pizza shuts down all stores across Italy

MILAN, Italy: Milano Today has reported that seven years after launching in the country, American pizza giant Domino's has now ...

Starting quarterbacks are mastering the sideline route this preseason. Bills quarterback Josh Allen and Mac Jones of the Patriots are ...

Chicago Bears wide receiver N'Keal Harry is expected to miss up to eight weeks recovering from surgery to repair a ...

Whether you're booking a plane ticket at the last minute or looking to go to a lackluster preseason football game, ...

Politicians seek to control classroom discussions about slavery in the US

Of all the subjects taught in the nation's public schools, few have generated as much controversy of late as the ...

At least six journalists have faced prosecution for their professional work in the last month in Iran's western province of ...