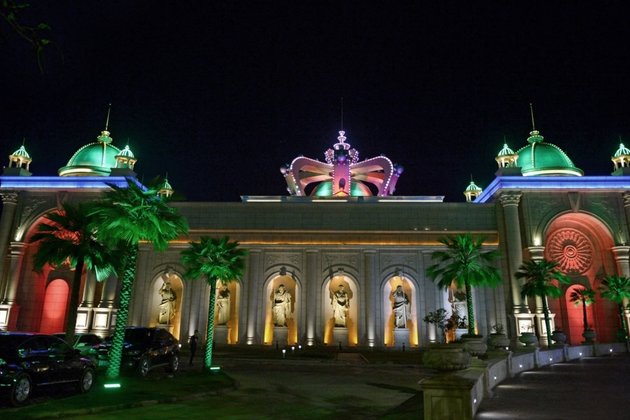 The unchecked growth of freewheeling business enclaves and casinos in and around Laos is opening new money laundering and drug trafficking options for crime networks using the country to push spiraling volumes of narcotics across Asia, the United Nations warns.

As China and Thailand tighten their borders with Myanmar, the U.N. Office on Drugs and Crime says transnational gangs based in the lawless corners of eastern Myanmar are funneling ever more methamphetamine through Laos.

In recent conversations with VOA, the UNODC said special economic zones - with eased regulations to attract foreign investors - and the casinos that often anchor them have also become major trafficking and money laundering hubs for the crime networks that make Southeast Asia's Mekong River countries home.

The agency counts over 140 casinos and 128 special economic zones across the region. Few trigger more alarm than the Golden Triangle Special Economic Zone, which draws its name from the crime-ridden borderlands where Laos, Myanmar and Thailand meet. The 10,000-hectare swath of northwest Laos is effectively run by Chinese national Zhao Wei, who owns its centerpiece Kings Romans casino. 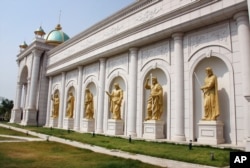 "There are many SEZs and autonomous territories with security and crime problems dotted across the Mekong, but the GT SEZ is one of the most prolific and notorious, and Zhao Wei and his group are clearly very well financed and able to move money despite sanctions," Jeremy Douglas, the UNODC's regional representative, told VOA.

The U.S. Treasury Department sanctioned Zhao and his companies in 2018, placing him at the heart of a transnational criminal network laundering money through the economic zone for Myanmar's drug lords while trafficking in everything from narcotics to people and wildlife.

VOA could not reach Zhao, but he has called the allegations groundless in past media interviews. Neither the Golden Triangle zone nor a Lao government spokesman replied to VOA's requests for comment.

With Zhao's business empire still expanding, though, and more gambling and economic zone projects across Laos in the works, the UNODC fears the tiny, landlocked country's role in the region's trafficking and money laundering will grow.

Unfazed by the sanctions, Zhao's Dok Ngiew Kham Group is pressing ahead with an international airport just east of the Golden Triangle zone in a joint venture with the Lao government. A $50 million port under construction to the north of the zone will serve cargo ships plying the Mekong River to and from China, courtesy of Osiano Trading, another company a local government official told Radio Free Asia in 2020 that Zhao owns.

Osiano is also developing what it calls on a subsidiary's website a $1 billion "culture park" on the outskirts of Laos' capital, Vientiane, featuring a folk village, amusement rides and, reportedly, gambling facilities. Zhao and his team have also publicized their visits to the northeast and south of Loas over the last few years in search of land for more development projects. As Chio Wai, an alias listed by the U.S. Treasury Department, Zhao is even named as co-director of a recently approved island resort project in Cambodia, which granted him citizenship in 2018, according to a royal decree seen by VOA.

The UNODC suspects much of the Golden Triangle zone has been developed with laundered drug profits, and says Zhao's expansion plans there and elsewhere offer new opportunities to launder more. It fears the port and warehouses he is building north of the zone, just across the Mekong River from Myanmar, will also prove ideal for storing and trafficking more of the drugs washing over Southeast Asia and making their way as far as Australia and Japan. 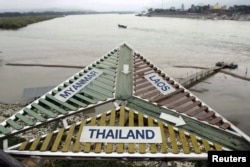 FILE - A signboard at the Thai village of Sop Ruak on the Mekong river in the Golden Triangle region where the borders of Thailand, Laos and Myanmar meet, Jan. 14, 2012.

Others are worried, too. Khemmarin Hassiri, who commands the Royal Thai Police Foreign Affairs Division said Thailand also believes that the growth of special economic zones and casino cities on its borders with Laos and Myanmar could mean more crime. Much of the methamphetamine pouring out of its neighbors ends up in, or passing though, Thailand.

"If there is something to facilitate illegal activities, especially for drug trafficking, we would put that in our top agenda," he told VOA.

The borderlands' casinos have been drawing gamblers for decades, mainly from China, where gambling is mostly banned. The border closures and travel restrictions that followed the outbreak of COVID-19, though, sent their foot traffic plummeting, sparking a groundswell of online gaming sites to compensate.

Khemmarin said the number of online sites targeting Thais from both inside and outside the country has more than doubled since the pandemic started. The UNODC says the number of sites just in Thailand, where most gambling is also banned, jumped from 240 to 558 between 2019 and 2021. 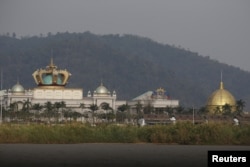 FILE - The Blue Shield casino operated by the Kings Romans Group stands in the Golden Triangle special economic zone on the banks of the Mekong river in Laos near the border between Laos, Myanmar and Thailand, March 2, 2016.

The U.N. and Thai police both say that also opens the door for more criminal activity.

"Casinos are great for moving and disguising money, and even better if they are both a traditional casino that regular gamblers and VIPs go to as well as online," said Douglas. "They are well known for moving unaccountable cash, and online they can run with anonymous payment systems and cryptocurrencies, and together they have the ability to mix and legitimize money incredibly quickly."

News reports over the past month that the Lao government has granted a private company, the Laos Offshore Gaming Authority, the power to start licensing online gambling sites in Laos have heightened those fears. With Lao citizens barred from gambling in Laos, the sites will target foreign customers.

Khemmarin said the company "would be a threat to Thai people," that the Thai government was "very concerned" about it, and would raise the issue with Laos soon.

The Mekong region's casino cities have also turned into hotbeds of human trafficking, with crime networks luring or smuggling young men and women across borders on the promise of well-paid gaming jobs, then trapping them in prison-like compounds to run online scams targeting other countries.

Cambodia has emerged as the latest epicenter for these schemes. With the country now cracking down on its own online casinos, though, the UNODC says their operators may start moving to Laos. 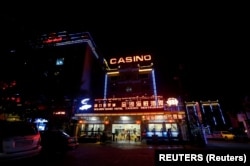 FILE - A Chinese Restaurant, Hotel and Casino was seen at the Preah Sihanoukville province, Cambodia, Sept. 27, 2017.

Yosson Ruangsunngamsiri, a human trafficking official in Thailand's Department of Special Investigation, which deals with transnational crime, told VOA it has already seen an uptick in the trafficking of Thais to Laos. The Thai government issued a public notice in March urging citizens not to accept irregular work at the Golden Triangle zone in particular. Khemmarin said Thai authorities are actively investigating a property inside the zone believed to be trafficking Thais into the zone for online scams and sending the profits to Myanmar.

The UNODC is urging governments to pay more attention to the mounting criminal activity swirling around their countries' casinos and special economic zones, and to draw up new plans and pass stronger laws to tackle the problem.

"Governments and the region have only started discussing this with us recently and it is early days, but they need to take it more seriously and be candid with each other quickly," Douglas said.

"But aside from acknowledging they need to do something about casino risks and organized crime, the region needs to step in and take concrete steps to address the known criminals that are involved - basically clean the industry up before it does more damage.' 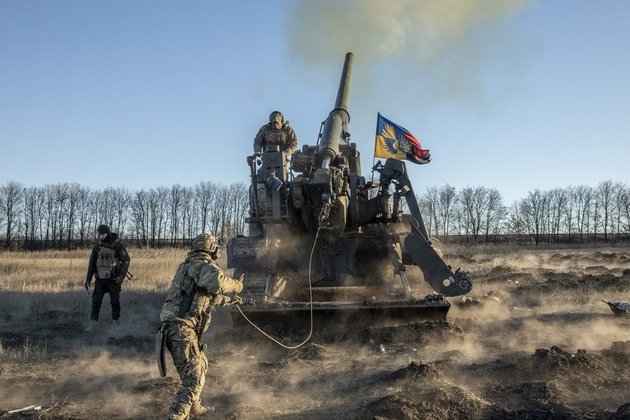 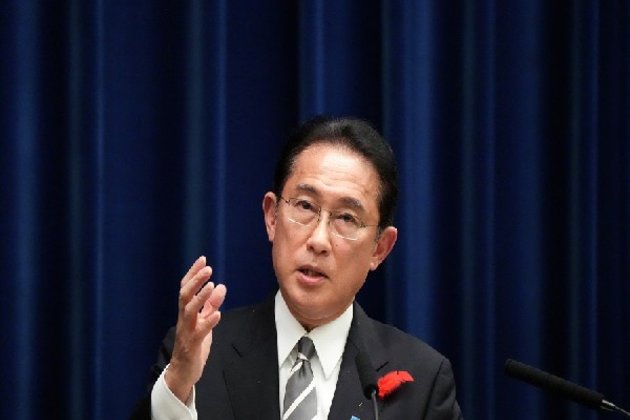